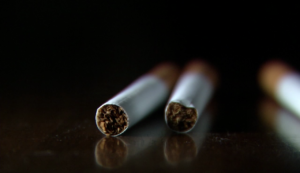 SALISBURY, Md. – In a surprising turn of events, the Maryland General Assembly has passed a bill that would raise the legal age to buy tobacco from 18 to 21. With a 101-35 vote Wednesday, the House of Delegates moved to send the measure to Governor Larry Hogan. The house agreed to a change made by the Senate to allow an exception for active-duty members of the military. Under the bill, people who are 18 and can show military identification, would still be able to buy tobacco in Maryland. And while the proposed legislation is designed to help crack down on teens smoking, vaping, or using e-cigarettes, others don’t feel the raise in the legal age is the way to go.

“I don’t think it should. I think that if you’re old enough to fight for your country, you should be able to have a cigarette for it,” said Jessica Murdick.

“I just don’t agree with it. I think if you can vote, if you can fight for the country it shouldn’t happen, regardless if you can have your military ID or not,” said Brittany Lecates.

Washington D.C. and eight states, including neighboring Virginia, California and Massachusetts have already set the smoking age at 21