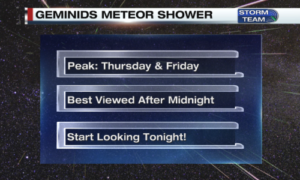 The Geminid meteor shower peaks this Thursday night and early Friday morning, but meteors are flying by Earth all week long. There have already been eyewitness accounts from people across Maryland so far this week.

The Geminid meteor shower occurs because of a comet/asteroid that orbits the sun every 550 days, throwing out debris (meteors), which creates a nice show every other year for Earthlings. The best part about this year is that the moon is a waxing crescent, which is a small moon, plus the moon will set around 11 PM or so which means it will be pretty dark for the best viewing. The Geminid meteor shower is actually the most intense meteor shower, dropping 120 meteors an hour on average, and falling at a speed of 79,000 mph.

The weather looks kind of cloudy Thursday night, but there might be just enough clearing that night and into Friday morning for a good show, but in case that doesn’t happen try to look tonight and enjoy. The best time to look is after midnight each night, and the best place to look is anywhere in the sky preferrably with the moon to your back. Hopefully you see some!

The next best Geminid meteor shower show will be in 2020.