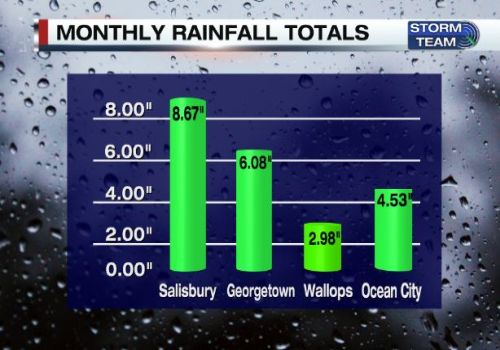 The month of October was wet with falling temperatures. The month however started humid and hot with highs approaching 90° and feeling more like August as a ridge dominated over the eastern half of the country. The warmest day of the month took place within the 1st week. Georgetown was successful on achieving 90° on October 4th while Salisbury and Wallops reached the upper 80s on the same day.  Rainfall amounts throughout most of Delmarva were less than a tenth of an inch with Georgetown receiving about a fifth an inch by October 10th. 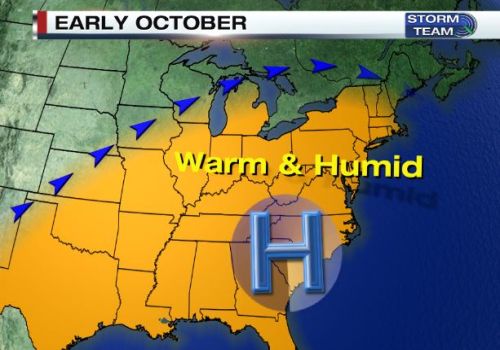 The seasons will take a swift change on October 11th as Tropical Storm Michael swarmed in from the south and a cold front from the north ushering in autumn. Dew points ahead of Michael’s arrival where unseasonably & oppressively humid into the upper 70s with intense wind gusts throughout the peninsula up to 60 mph.  The combination of these systems provided for a deluge of rain especially over Central Delmarva, where Salisbury received 7 inches, which doubles the monthly average. 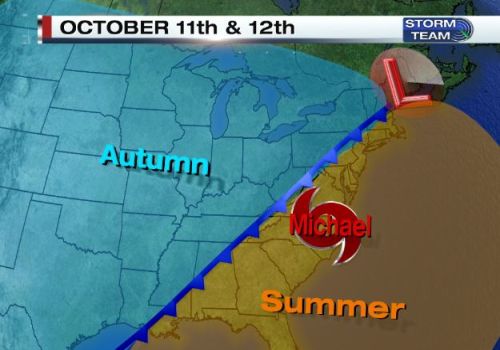 Fall took over throughout the remainder of October, as highs never returned into the 80s with occasional cold fronts dipping through the area bringing lesser amounts of rain. The last 10 days of the month brought unseasonably cool air to the point where highs only made their way into the 50s about half the time. Lows in the month went from 60s early on to 30s being the common norm as Halloween neared. Uniquely, all the weather stations reported the coldest temperature on the 22nd, with Salisbury seeing their 1st freeze of the season at 31°.

The unique thing about October was that even though the 2nd half of the month was cool, it could not offset the summer heat experienced in the 1st half. Temperatures were actually 3°-5° above average at all 4 sites. Precipitation amounts varied throughout the peninsula with Salisbury having its 4th wettest October, but Wallops finishing slightly below average while Ocean City and Georgetown receiving above average rainfall.