SALISBURY, Md. – Wednesday night at Salisbury University locals got their chance to listen in  to the arguments from the three candidates vying for Wicomico County Executive.

For the incumbent, Bob Culver, he said the forum provided the perfect opportunity to highlight his accomplishments over the past four years.  Accomplishments including classifying the airport as an enterprise zone to attract new business, as well as $10 million of cuts made for the county budget under his watch. 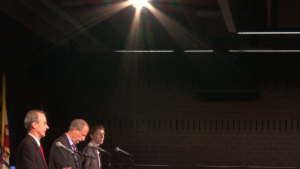 He says he looks forward to continuing to build the county infrastructure, most importantly building up local schools.

“We have been rebuilding schools. We have started doing – we finished up Bennett Senior, Bennett Middle, and at the same time we’ve finished up West Salisbury now. We’re now working on plans for Beaver Run.”

But one of his challengers, Jack Heath, a veteran of Salisbury city council, says many of things Culver has done have been reactive, not proactive.  Something he says he will be, starting with mapping out a plan for the future.

“We don’t have a strategic plan that has been shared with the county. And I think that’s a vital piece of the puzzle that’s missing.”

“Education is the key driver for economic development and job growth, and we have to understand that.”

Meanwhile, Democratic challenger John Hamilton is a Kent Isle native, and graduate of Salisbury University, who says keeping young people here locally is the key to a bright future.

“A vast majority leaves this area to live other places or have jobs other places. We need to get what they want and bring that to the front and make that a top priority so that we can keep our young people here.”

Hamilton lists increased funding to education and the infrastructure as top priorities as well.

The deadline to register to vote online is October 16 in Maryland, same-day registration and voting ends November 1.