CAMBRIDGE, Md. – Thursday night is the final chance for Maryland voters in District 37 to see all of the candidates in one room.  Because Local Matters, we went out and asked residents what they thought were the big issues to them.

Topic number one on everyone’s mind, the local economy. 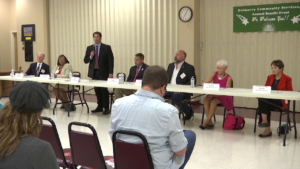 “I think they should try to get businesses to move in to the buildings that are already existing and have been for years,” said Linda Chojnowski, a resident of Taylor’s Island.  “And I think it’s important that if the businesses come here that the jobs go to the local people.”

One local we spoke with said their biggest priority was diminishing the amount of drugs and violence, saying more jobs can keep locals clear of problems.

One county official says he’s concerned regarding the amount of regulations out of Annapolis and how that could hurt Dorchester’s ability to attract business.

“There’s been a lot of regulations lately come in that are making us less business-friendly than we’d like to be, and there’s the threat of other ones coming in this year.  The increase in minimum wage for the shore would be devastating for Dorchester County,” said Bill Christopher, the president and CEO of Dorchester County’s Chamber of Commerce.  “Here in Dorchester, going to a $15 minimum wage would actually suit some businesses down.”

Economics in the area include the bay, and the expectation that the next representatives can find a healthy balance between regulations to help protect the bay, while not restricting one of the biggest industries in Dorchester.

“So making sure we’re watching what’s happening there that we’re protecting the health of the bay, but not putting such stringent requirements in place that Watermen can’t make a living ,and that we drive aquaculture across the bay into Virginia,” said Christopher.