Decreasing temperatures and sun in October 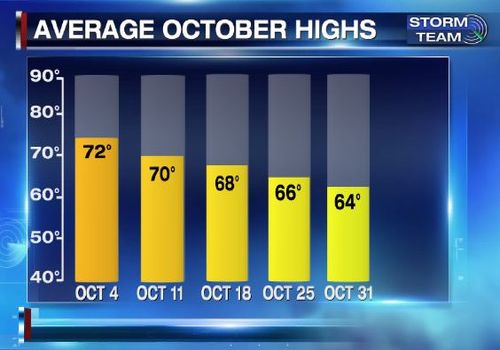 The month of October consist of big changes on Delmarva when it comes to our temperatures but also our day length. Autumn begins to take charge as it gets deeper in the month.  Since the equinox took place about 10 days prior to the beginning of October, the 1st day of October is down to 11 hours and 47 minutes of daylight. Sunset takes place at 6:45 PM and sunrise just shy of 7 AM. Average highs on October 1st are in the low to mid 70s while lows are in the lower 50s. Also beginning in the month of October you will begin to notice the sunrises and sunsets coming out of the south while compared to the north back in August.  This is due to the sun being concentrated over the southern hemisphere at a lower angle.

Temperatures throughout early October are also fairly warm because the heat from the summer is still in place on the earth’s surface. That heat begins to fade as the 70s are replaced with the 60s for average highs by the middle of month while the 40s enter the picture for average lows by the early portion of the 2nd week of the month. Sweater weather becomes a common phrase as the jet stream begins to get speed but also dig more towards the south into the United States, allowing cold fronts to bring strong pushes of arctic air. Keep in mind that because the days are getting shorter, our nights are getting longer thus allowing for those temperatures to drop further but also faster and earlier in the evening. The effect of longer nights also keeps the cooler temperatures around deeper into the morning thus giving a smaller window for a big warm-up to take place. 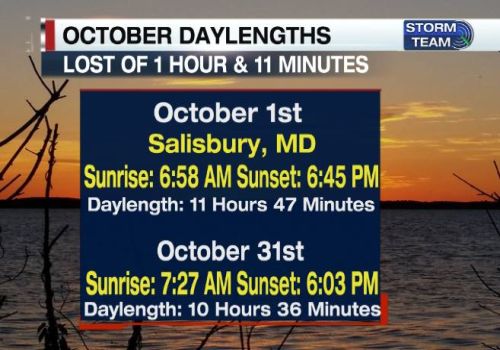 The tilt of the earth plays a huge role on how the day length is throughout the year; but also on the solar radiation hitting a location which impacts the temperatures. In the northern hemisphere, we are receiving less of that solar radiation each day throughout the month, thus cooling us off even quicker. That same tilt provides for a decreasing sun angle in October, creating more of that southern view in the sky but also that waning solar radiation. The sun angle on October 1st is 48.3° at the solar noon (midpoint between sunrise and sunset) and by Halloween only 37.4°.

The difference of daylight from one day to another in October is over 2 minutes but it slightly less towards the end as the peak of decrease took place back in September. The total loss of daylight throughout the month is over an hour. 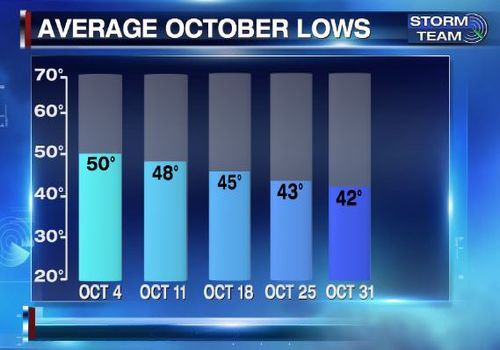 The last day of the month which is Halloween (October 31st), you can definitely tell autumn is in full swing from the weather to the astronomical effects. Average highs on the 31st are 64° and the average low is down to a chilly 42°. Sunset takes place just after 6 PM and sunrise almost at 7:30 AM.  The amount of day length is over 10 hours and a half hours.