An in-depth look at the District 37A race

CAMBRIDGE, Md. –  One race we are all looking forward to, and one on display at the candidate forum Thursday night, is the District 37A race pitting Democratic incumbent Sheree Sample-Hughes against Republican challenger Frank Cooke. 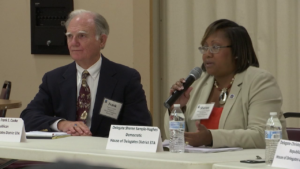 Her challenger, Cooke, is a former software engineer who was once with the FBI, and a former Cambridge city commissioner.

Cooke says the eastern shore has always lagged behind the rest of Maryland in terms of economics, and says supporting Governor Hogan’s pro-business policies like creating manufacturing initiatives can attract more business to the county.

“Putting in policies and supporting Governor Hogan’s policies, pro-business policies, can do nothing but help.  I think that’s the contrast between my opponent and myself.  I would be in there voting against minimum wage.”

Hughes says her biggest concern for Dorchester is flooding and doing more to contain the natural disasters in the area.

Hughes adds that she knows there are struggles for the area to reach the $15 an hour minimum wage, but that we have to look at the whole issues on a bipartisan basis.

“When we’re on the floor voting on legislation that involves tax credits, then I want to be that voice that says ‘hey, Dorchester County can benefit them from this.’ We need jobs, we need opportunities with decent wages.”

The Latest: Elation and wariness after verdict in Floyd case