Republican Arlett set to square off against Democrat Carper 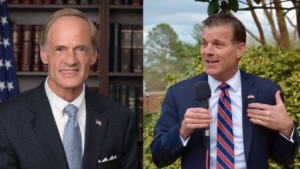 Rob Arlett won the Republican nomination, with about 67 percent of the vote, against Roque “Rocky” De La Fuente and Gene Truono.

“This is not the finish line,” Carper told a crowd of about 60 supporters, including Democratic Gov. John Carney, in declaring victory. “This was a good solid win.”

Carper received about 65 percent of the vote compared to Harris’ 35 percent.

Eying a fourth term in the Senate, Carper touted his experience and his ability to work with lawmakers from both sides of the aisle in Congress, despite being a vocal Trump critic. He served five terms in the U.S. House and two terms as governor before being elected to the Senate in 2000.

“I’m happy with how things are going here in the state,” said Jim Williams, 39, who works in the financial services industry and voted for Carper. “I think he represents us well, and I didn’t see a need for change.”

Carper had a huge advantage over Harris in fundraising, having raised more than $1.3 million this year, compared to a little more than $120,000 reported by Harris as of mid-August. He outspent her by a similar margin.

“We’re going to just keep pushing against the machine,” Harris said. “Our voices are louder than ever, and we are not going to sit silent whenever we see any injustices.”

Carper congratulated Harris for running a good race and inspiring young people to get energized and involved.

“We need to reunite as a party,” he said. “We need to keep in mind that we are not one another’s enemies.”

To see our Political Insider with Carper, click here.

To see our Political Insider with Arlett, click here.

Russia says more Ukrainian fighters from Mariupol stronghold have surrendered, bringing total who have left to 1,730