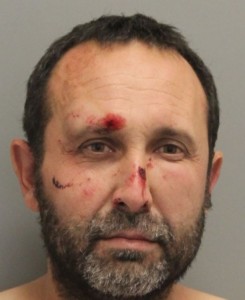 Greenwood, DE- (UPDATE 12/2/22) On December 1st around 7: 15 pm, Delaware State Police responded to a reported shooting off of Bender Farm Road in Greenwood.

When troopers arrived they found a 62-year old male victim who has been shot in a lower extremity and stabbed in the chest. The victim was rushed to a nearby hospital for serious injuries.

The suspect identified as Roger McBroom Jr. had fled the scene before police arrived.

The relationship between McBroom and the victim is unknown at this time.

The following day Capitol Police and Dover Police responded DSP headquarters for a call of a suspicious person, who was later identified as McBroom, fled in a vehicle.

McBroom refused to stop, but was later taken into custody when his car become stuck in traffic.

He is facing the following crimes: Aggravated 1st degree assault, 2 counts of aggravated menacing, and two count of possession of a deadly weapon during commission of a felony.