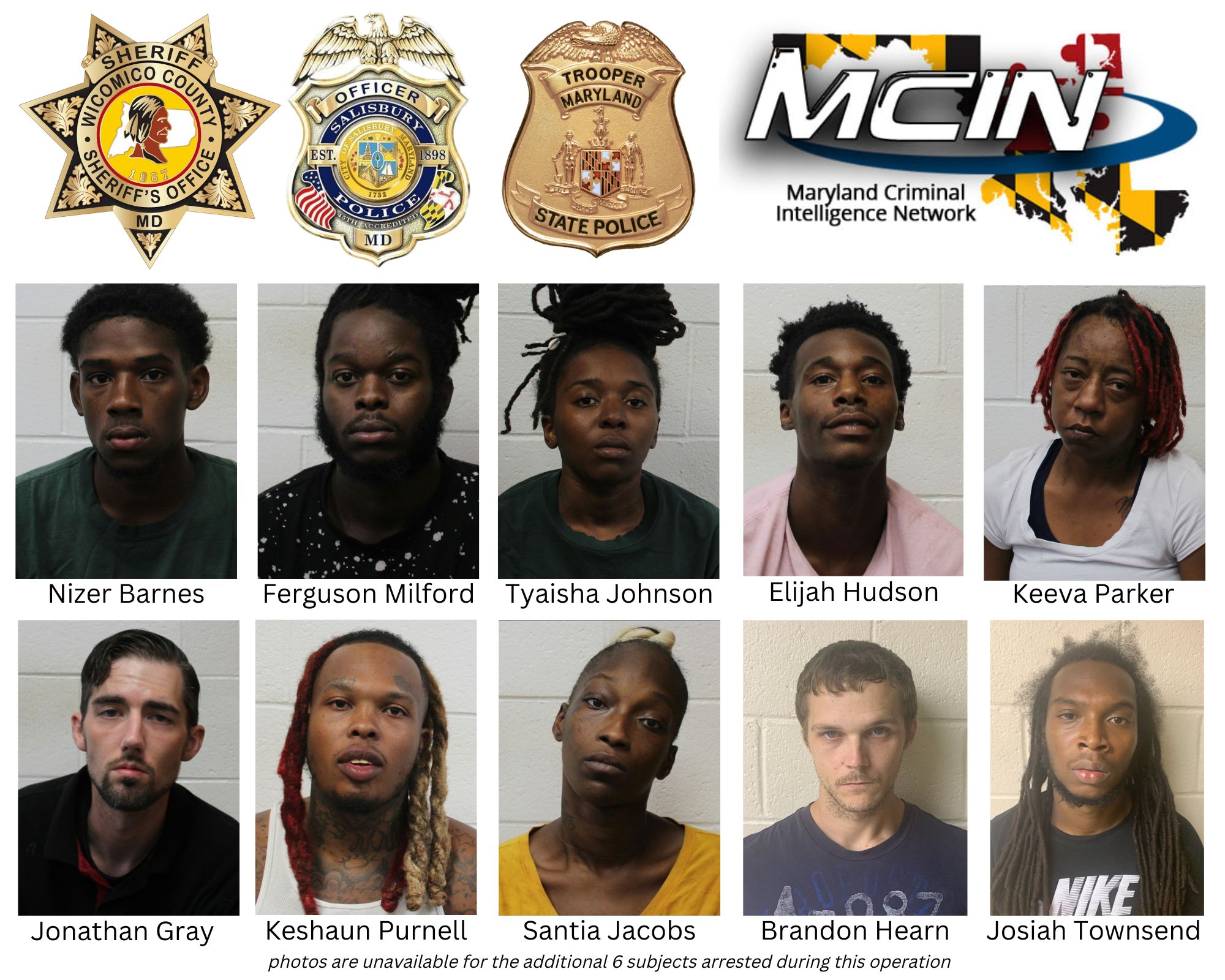 We’re told throughout the course of the investigation, six search and seizure warrants were authorized. On September 20th, the Wicomico County Sheriff’s Office participated in a joint MCIN Operation with the Salisbury City Police Department and Maryland State Police in an attempt to combat the open-air drug markets. A search warrant was served in the 800 block of West Road, at which point four suspects reportedly fled from the rear of the residence. All four subjects were located and taken into custody and identified as 20-year-old Nizer Barnes, 20-year-old Ferguson Milford, 26-year-old Taisha Johnson, 46-year-old Terrence Gray, and 27-year-old Elijah Hudson. While fleeing from police, Milford allegedly threw a .25 caliber handgun and Barnes threw cocaine and heroin, all of which were recovered.

Gray was released on a criminal citation for trespassing. Barnes, Johson, and Hudson were released on their own recognizance, while Milford was held without bond.

An additional search and seizure warrant was served on 35-year-old Keeva Parker and her vehicle, resulting in the discovery of 16.08 grams of cocaine. She was charged and released on her own recognizance.

A traffic stop was conducted on a vehicle that resulted in a K-9 scan, leading to the discovery of a 9mm semi-automatic handgun. The occupants, identified as 33-year-old Jonathan Gray and 24-year-old Keshaun Purnell, were arrested and charged with handgun-related offenses. Both were released on their own recognizance.

A traffic stop was conducted on a vehicle being driven by 41-year-old Darian Walker, leading to the discovery of 121.02 grams of marijuana packaged in 22 individual bags. Walker was charged via an application for charges and a criminal summons was issued. Walker has not been served with the summons.

A traffic stop was then conducted on a vehicle resulting in a K-9 scan. Inside the vehicle, police located a small amount of crack cocaine and paraphernalia. The occupants, identified as 48-year-old Hubert Rivers and 43-year-old Crystal Spencer, were charged via an application for charges. Rivers was served with the criminal summons, however, Spencer has not been served.

A traffic stop of a vehicle being driven by 55-year-old William Gordy led to the recovery of a small amount of crack cocaine and paraphernalia. Gordy was charged via an application for charges and a criminal summons was issued.

Police conducted a traffic stop on a vehicle, and while it was coming to a stop, the front seat occupant was seen throwing heroin out of the window. The occupants were identified as 26-year-old Josiah Townsend, 28-year-old Brandon Hearn, and 34-year-old Santia Jacobs. Police say Jacobs provided a false name and was found to have a warrant for her arrest. Townsend and Hearn were issued criminal citations for possession of heroin and released. Jacobs was served with the warrant and charged via an application.

On September 22nd, a search warrant was served on the person of 41-year-old Lee Andrews, He was found in possession of a small amount of crack cocaine and charged with a criminal citation before being released.