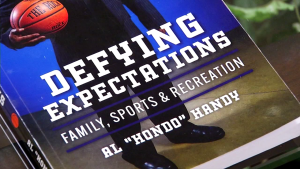 OCEAN CITY, Md. – Saturday, September 24th, Al “Hondo” Handy, who has become a staple in the Eastern shore sports community, is officially adding author to his resume by launching his first book, “Defying Expectations” a book about Family, Sports, and Recreations.

While most know Hondo as the former manager of the recreational sports programming in Ocean City, his journey there is the story he’s trying to tell.

He tells 47 ABC WMDT, he grew up playing multiple sports like basketball, baseball, soccer, and even indoor track, but a career-ending knee injury carved a new path in his life and led him to recreational sports.

It was recreational sports where he’s been able to help kids of all athletic abilities over the years learn the true importance of sports which he says is sportsmanship, and family and the lessons are all written down in his new book. “I’m a little excited but I’m also a little nervous because I anticipate all my friends being there and I accomplished something that was on my bucket list so I think it’s an honor that I had the opportunity to do this,” says Handy.

Handy also says he hopes to write another book someday, but this is a great start to the legacy he hopes to leave for the community.

The official book launch and signing are set for Saturday, September 24th at the Residence Inn by Marriot in Ocean City from 1 to 3 p.m.

Technology's role in the rise in domestic abuse cases