25th annual Running of the Bull returns, Dewey gearing up for large crowds 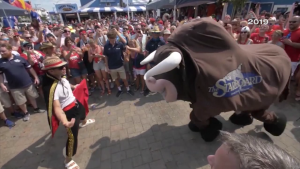 DEWEY BEACH, Del. – Saturday marks the return of an iconic event in Delaware ‘The Running of the Bull;’ a bizarre but fun day that thousands of people head to the beaches and bars for.

This all started 25 years ago when a customer named Michael McDonnell was watching Pamplona’s Running of the Bulls in Spain on TV.  He had an idea to get someone in a bull costume and chase them down the beach. What seemed a bit wacky at the time has turned into one of the biggest weekends in Dewey.

People of all ages wear Pamplona-style red and white and prepare to see hundreds of participants stumble, fumble, and run from two men in a bull costume. “It was literally 30 people 25 years ago that ran down the beach chasing a guy with a bull head costume on the next year it was a hundred people, the year after that it was 300 people and so forth,” says Steve Montgomery, owner of the Starboard restaurant and bar. He adds, “So it’s really just silliness, fun, and really something this country could use more than anything right now between COVID, politics, gas prices, and all those other things, starboard is the place to be on Saturday to forget all that.”

Montgomery, owner of Starboard tells us, that this year they have the Baltimore Ravens mascot participating, the Washington Capitols mascot, and they’re hoping to get the university of Delaware mascot as well.

However, even more importantly, Montgomery says this all supports a great cause because they raise funds for the local volunteer fire company. They don’t just raise those funds but bring a lot of business to Dewey. “We call it the 4th holiday weekend in Dewey beach, I can promise you that every single business in this town thrives over this weekend,” says Montgomery. “The fourth of July is a 10 to 15-day weekend and I mean that from a business perspective. It’s busy, we know the traffic we know people are all coming for a week or 10 days or two weeks and it’s really the peak of the summer.”

Montgomery also says they expect to have lines wrapped around the building, and many hotels are already sold out.

The event kicks off Saturday, the 25th with a kids version at 10:30 a.m. between the Dagsworthy and New Orleans street beaches.

The actual event starts at the Starboard at noon, with the bull run beginning at 2 p.m. You can visit the Running of the Bull website for more information.