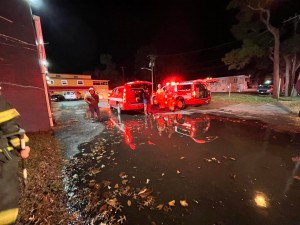 OCEAN CITY, Md. – A fatal fire in Ocean City is under investigation.

Fire officials say on Monday night around 10:50 p.m., a Worcester County Sheriff’s Deputy was patrolling the area of Ocean Gateway and Elm Street when they saw a fire. That deputy called the Ocean City Fire Department, who responded to the 9000 block of Elm Street.

After extinguishing the fire and searching the smoke-filled building, fire officials say they found a male victim deceased.

We’re told the building is a total loss, and there were no working smoke alarms present.

The fire remains under investigation. In the meantime, we’re told the victim’s body was taken to the office of the Chief Medical Examiner, who will determine the cause and manner of death.