A look back at Tropical Storm Isaias, one year ago today

It then traveled north tearing through Delmarva as a strong tropical storm on August 4, 2020. Nine tornadoes touched down as a result of the storm, breaking records all across Delmarva. 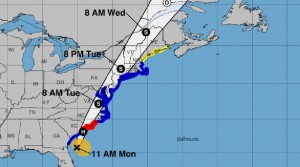 The other major record was an EF-2 tornado in the Dover area that was on the ground for over 35 miles, breaking a state record for the longest tracked tornado.

For more details on all the tornadoes that touched down on Delmarva, click here.