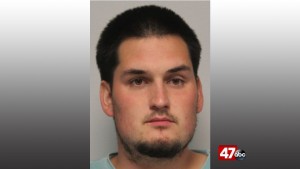 When troopers arrived on the scene, they reportedly observed the front door and large pane front window damaged, but no entry was made into the business.

The investigation revealed Nay arrived at Shore Stop in a black SUV, exited the vehicle, and approached the front door with an old concrete parking bumper.  Police say Nay attempted several times to use the concrete bumper to enter into the business but was unsuccessful.

We’re told the 24-year-old then attempted to use a metal object he found in the area, reportedly trying to pry open the door but was again unsuccessful. After not gaining entry with the second object, police say Nay got a metal canister and attempted to throw it through the door and then the large window. He fled the scene after not being able to get inside of the store.

Police took Nay into custody without incident, and charged him with the following crimes:

Nay was arraigned in the Justice of the Peace Court and committed to Sussex Correctional Institution on a $10,000.00 cash bond.