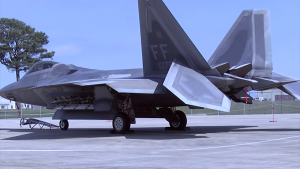 WALLOPS ISLAND, Va. – 47 ABC got a chance to speak with some others crews that will be in the air in the Ocean City Air Show this coming weekend.

Among the many planes that will be flying are the U.S. Air force Thunderbirds and the F-22 Raptor Demo Team. We’re told planes like the F-22’s will do numerous flips, tricks, dives and much more.

Pilots say the most exciting part is performing in front of large crowds that always come to the beach. Although flying is a huge part of their job, they tell us being apart of the crew, traveling the world and giving back to the community is really what the upcoming weekend is about for them. “That’s probably the coolest things that I’ll ever do in my career is be able to travel around the country and the globe with a small team of people that we’ve hand selected to fix and maintain the aircraft and then showcase the jet,” says Joshua Gunderson, F-22 Raptor Commander and pilot.

Meanwhile the Thunderbirds, one of the more patriotic looking teams says, they’re ready to get back in the crowds and give people American pride. “It’s a team effort on this team and it was a team effort to get me to where I’m at today, but we really do represent the pride precision, professionalism of all of the air force members personnel men and women who are out there executing their duties every single day,” says Major Jason Markzon, Advanced Pilot Narrator for the Thunderbirds.

Among the other planes that you can see at the Ocean City Air Show this coming weekend:

Click here for more information about the line-up for the air show.