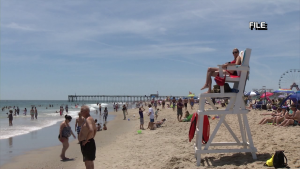 OCEAN CITY, Md. – One man died after swimming on the beach in Ocean City last Wednesday, according to police.

Police say on June 23rd just before 12:30 in the afternoon, they responded to 145th street and the beach to assist with an EMS call. Once there, police learned a 46-year-old man from Harrisburg, Pennsylvania suffered a medical emergency while in the water.