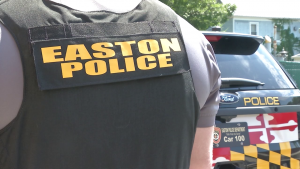 EASTON.- MD. – Officers responded to a minor motor collision but found something they weren’t expecting.

Friday,  officers arrived to Ocean Gateway and Lomax Street were a K9 scan was performed on one of the vehicles involved.

Officers then located 8 capsules of suspected Heroin in the center console.

41 year old Richard H. Gisiner was taken into custody and transported to the Talbot County Detention Center to be processed.