Vigil to be held for family who died in Cambridge fire 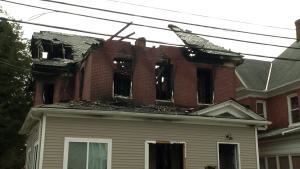 CAMBRIDGE, Md. – The family of two survivors from a tragic Cambridge fire is organizing a vigil this weekend. The mother of Whitney, the mom who survived the fire says, the vigil will be held in Fat Ricky’s parking lot.

The fire broke out in a Cambridge apartment complex last Thursday, killing three people. The grandmother says as of now, her family just needs monetary donations for funeral costs and medical bills.

Whitney is currently in stable condition at Johns Hopkins Bayview medical center. Her mother tells us, she has many broken bones in her hips and pelvic, but is unable to handle surgery due to damage to her diaphragm. The family is waiting to hear when Whitney is able to go through surgery.

If you would like to attend the vigil or donate to the survivors of the fire, it will happen Saturday April 10, from 1 to 3 p.m.

There is still no further information regarding how the fire happened.