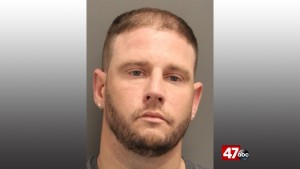 Police say on Thursday around 3 p.m., troopers responded to a call at 51 Webbs Ln., for reports of a physical altercation inside an apartment.

When police arrived on scene, they say a female victim told them Christopher Russum forced himself into her home. Police say despite the victim asking Russum to leave, Russum physically assaulted the victim then fled the scene after the victim threatened to call police.

Police later found Russum in the area of 1600 South Governors Alley while learning he had an active “no contact order’ in place between Russum and the victim.

Russum was arrested and charged with second degree burglary and related charges.