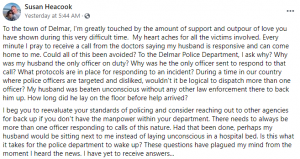 DELMAR, Del. – As Delmar Police Corporal Keith Heacook fights for his life after being attacked on Sunday, his wife, Susan, is taking to social media to speak out on the incident.

Susan wrote on Facebook on Tuesday that she prays for her husband’s recovery, but also had a few questions aimed at the Delmar Police Department. She wrote, “Why was my husband the only officer on duty? Why was he the only officer sent to respond to that call?” Susan also questioned, “During a time in our country where police officers are targeted and disliked, wouldn’t it be logical to dispatch more than one officer?” Susan ended the post by saying if things had been different, her husband may not be “laying unconscious in a hospital bed.”

On Monday, we did follow up on concerns circulating around Delmar about getting more police officers and funding for the department. Now, the town of Delmar is responding to Susan Heacook’s public plea for answers to those questions.

Wednesday, Delmar Mayor Michael Houlihan told 47ABC the police department already has limited resources, and is struggling to recruit new officers. He says one officer recently retired, and of the four applicants they received, only two were fit candidates.

Those issues with attracting new police officers and keeping a full staff are something that Mayor Houlihan says will be addressed down the road. “There will be a time when we can have this discussion, where we can all sit down at the table with the mayors and department heads,” said Mayor Houlihan.

The mayor says Delmar is not the only jurisdiction struggling with getting enough officers on duty. “I understand why people would say ‘Why would I want to go into law enforcement with this kind of climate right now?'” said Mayor Houlihan.

But for now, Mayor Houlihan says supporting the victims of the attack is the most important thing the community can do. “I’m grieving too. This has been a stressful few days for our town. We have a great community in Delmar. We always go with ‘Delmar Strong’ and that is truly who we are. Unfortunately, we had something that was terrible that happened to us,” said Mayor Houlihan.

At last check, Cpl. Heacook was still fighting for his life at shock trauma in Baltimore. We did reach out to Delmar Police Chief Ivan Barkley, but he did not immediately respond for comment.