Each decade a new set of 30 year climate normals are released, which keeps meteorologists, climatologists, and the general public up to date on what a typical day should be in a certain area (the normal) in terms of weather. It’s called “climate normals” because it’s an average of the weather over an extended period of time. “Weather” reflects short-term conditions of the atmosphere, while “climate” is the average daily weather for an extended period of time at a certain location. The new climate normals are data recorded between 1991-2020, while the most recently used normals (old data) were from 1981-2010. This blog will go through what we’ve noticed from the newest data.

When taking a look at the month of April across the United States, you can see that the new climate normals are warmer for a majority of the southern half of the country, while the Northern Plains and Great Lakes region have all cooled. Precipitation normals have also increased for a good portion of the South and Southeast, while the Desert Southwest is drier. Delmarva appears to be both warmer and drier compared to the old April data. 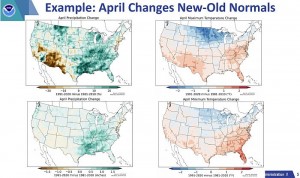 While some areas have warmed in April, it still varies across the country each month. Notice in the image below, Delmarva’s new climate normals are warmer for the months of October and December, but are a little bit cooler for November. The Southeast U.S. has had some of the most extreme changes and fluctuations in their new climate normals compared to other locations. 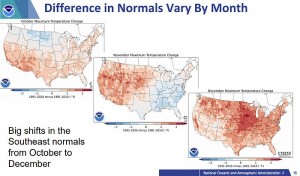 When you average out all the months together, the image below shows what the new 1991-2020 climate normals look like for the United States. A lot of warming almost everywhere, except for the north central U.S. It’s also wetter across the eastern U.S., and drier in the west. 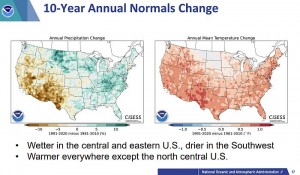 The amount of warming that has occurred in the last few decades is quite obvious when you look at the new climate normals compared to the Twentieth Century average. The entire country is red. This map specifically shows that the entire country is warmer than the Twentieth Century average, meaning the years between 1991-2020 were significantly warmer when compared to the years 1901-2000. Precipitation has also increased across a good part of the U.S. 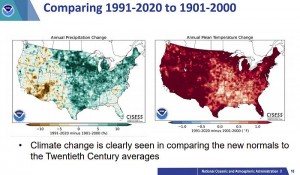 In conclusion, the new climate normals (1991-2020) clearly show an uptick in average temperatures for most of the United States. For example, the old average high temperature in Salisbury, MD for April 21st may have been 67°,  but with the new data, the average high will be higher than that. We’re still waiting for the official new climate normals to be released so we can get the exact numbers, and that will occur on May 4, 2021.

For access to the article that all of this information was pulled from, and for even more detailed information on NOAA’s new climate normals, click here.