Still on the search: Cambridge police looking for a man wanted for a fatal stabbing

CAMBRIDGE, Md. – A call for help from Cambridge police, as they intensify their search for a man wanted for murder.

While the crime happened in October of 2020, police have vowed they won’t stop… until they’ve brought justice to this case.

“That’s when we decided to do whatever means necessary to get this suspect off the streets and also for the family of the victim,” said Justin Todd, Operations Captain for the Cambridge Police Department.

On October 24th, in the 700 block of Douglas Street, police say the victim was stabbed in the torso.

By the time paramedics arrived, it was too late. The individual had already took their last breath.

Now police are searching harder than ever, to find the person in connection with this homicide, Ryshon Kelly.

“The family is the people that we want the answers for. You know, it’s one thing to have something like this happen to the community but when you have the family members out there they want justice for their loved ones,” said Todd.

According to police, Kelly is 5’7 and weighs 143 pounds. He has black hair and brown eyes.

His description is what police want to the public to remember, to finally close this case.

“We won’t stop until we get him off the streets, and that’s what I want to impress. If he’s watching this, I suggest him to turn himself in because we will find him, and we will bring justice to the victim,” said Todd.

Police tell 47ABC, they have reason to believe Kelly has changed his appearance to avoid being arrested by police, as there is an active arrest warrant for 1st degree murder. 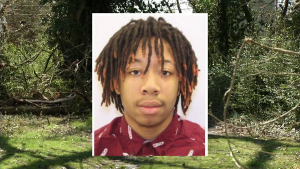 His charges include 1st-degree murder, assault, and other related charges.

If you know any information on his whereabouts, you’re asked to call the Cambridge Police Department at (410)-228-3333