3,000 meal boxes were packed, distributed for families in need Tuesday 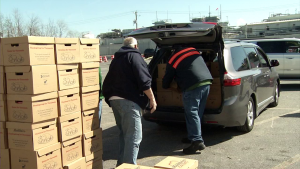 Volunteers from the community joined Mountaire employees in packing these meal boxes for families at Easter.

They also loaded the boxes into cars as churches, community groups, and non-profits picked up the orders.

We’re told this is the most they have ever packed for Easter.

The Director of Communications for Mountaire Farms said it’s so great to see the community coming out to support families, during these hard times.

“Everyone knows this pandemic has been so hard on so many, with businesses closing and people who were laid off from work people who have found themselves with food insecurity issues without even realizing they’d have that,” Cathy Bassett, the Director of Communications and Community Relations of Mountaire Farms, said.

Basset said last year they did not have this event.

We’re told there were around 65 volunteers that helped.

Basset added that they donated almost a million pounds of chicken last year to various groups to help during the pandemic.