Each day, the 47 ABC Storm Team shows you satellite and radar. Sometimes, especially on a weather active day, we will just show you radar imagery. But, why don’t we always show you both? Satellite and radar are two different instruments that display different things. 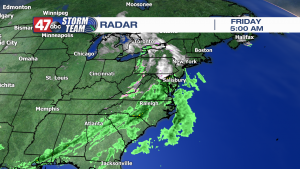 Radar is a ground based, active remote sensor, which means that it emits microwaves that scatter back to the radar when they strike targets. This back scatter from the targets is also referred as an echo. These targets could be raindrops, snowflakes, birds or, even, bugs. Radar emits a pulse and listens for an echo at least 1000 times a second. When the echo reaches the radar, the radar is measuring the echo intensity, which is called reflectivity. This is what we see when we show radar data. But, unlike the average radar, Doppler radar also shows the movement of the targets, which can tell us the velocity— a useful tool in monitoring severe weather.

The larger the targets, the higher the reflectivity. For example, heavy rainfall and thunderstorms are generally associated with high reflectivity. And radar can help differentiate the types of precipitation as different targets have different reflectivity values. Snowflakes have a lower reflectivity than rain drops of a comparable size. But, this can lead to some issues.

First, when it comes to snow, radar can underestimate snowfall in an area due to its low reflectivity values. It could be a light rain to the south of us and heavily snowing to the north, but radar will depict a stronger intensity of the rainfall than snow, due to the difference between reflectivity values of snowflakes and rain drops. Other limitations of radar include it cannot show us cloud top temperatures, cloud height or thickness. But, radar greatly helps forecasters sense precipitation as well as areas of severe weather. 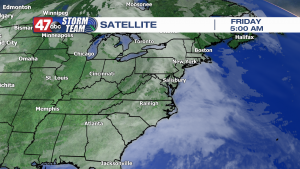 ES-16, do a great job at taking constant pictures of storms around the equator, they do not do a great job of capturing images at higher latitudes. Polar orbiting satellites solve this issue by capturing images at higher latitudes. These satellites orbit Earth at a lower altitude than the GOES satellites, but they also capture the whole world and can scan the world twice in 24 hours. The downfall of these satellites is that they do not have a fixed view of Earth like the latter, so they do not show continuous data for one area as Earth is rotating beneath it.

Satellite can show different types of imagery. Visible satellite imagery measures the fraction of incoming sunlight that is reflected to the satellite (also called albedo), which means this type only shows data during the day time. It can measure the thickness of clouds as thicker clouds appear brighter and it can differentiate between snow cover and clouds. It cannot tell us if there is precipitation. Infrared satellite imagery measures an objects infrared radiation—it’s temperature. It can display the temperature of cloud tops or Earth’s surface. But, it does not tell us cloud thickness or if there’s precipitation. Then, water vapor imagery measures infrared radiation only at wavelengths that water vapor emits. It can tell us how much moisture is in the air, but only above a certain layer in the atmosphere. This one is very helpful during hurricane season! 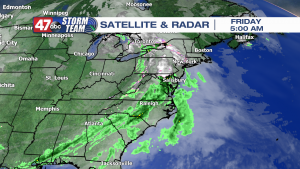 When combined, satellite and radar show cloud cover and precipitation, which helps locate features like a cold front. By showing satellite and radar on air, we are able to deliver the full picture to our viewers by letting you know what has happened, what is happening and what will happen.