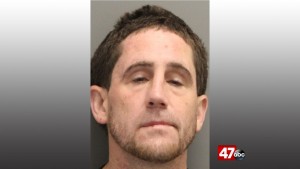 Police say on January 5th, at around 2 p.m., troopers were on patrol in the area of Frederica Road and Waterway Road observed Cotier walking. According to troopers, they were familiar with Cotier and knew he had several active felony warrants for his arrest.

We’re told Cotier began to flee on foot after seeing police and a chase ensued. Troopers reportedly told the 40-year-old to stop, but he ignored their verbal commands and attempted to flee. Following the pursuit, police say Cotier turned and stood in an offensive fighting stance before getting into a physical altercation with the troopers. Cotier resisted arrest and failed to obey the troopers’ commands.

Once taken into custody, Troopers say they found 6.04 grams of meth, 6.85 grams of marijuana, 0.07 grams of heroin, and drug paraphernalia.

During the incident, a trooper reportedly sustained a serious injury and was transported to a local hospital for treatment.

Cotier was transported to Troop 3, where he was charged with the following crimes:

Cotier was arraigned in the Justice of the Peace Court #2 and is being held at Sussex Correctional Institution on a $75,000 cash bond.