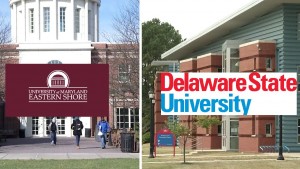 47 ABC – Delaware State University and the University of Maryland Eastern Shore each received historic donations from MacKenzie Scott, a philanthropist and the ex-wife of Amazon’s Jeff Bezos.

DSU and UMES are among 384 organizations across the country, including 16 other historically black institutions, which collectively will benefit from 4.15 billion dollars in the latest round of donations from Scott.

In a lengthy online posting, Scott wrote the, “384 carefully selected teams have dedicated their lives to helping others, working and volunteering and serving real people face-to-face at bedsides and tables, in prisons and courtrooms and classrooms, on streets and hospital wards and hotlines and frontlines of all types and sizes, day after day after day.”

President of Delaware State University, Dr. Tony Allen, spoke humbly of the gift on Tuesday saying he and other school leaders are overwhelmingly grateful for the chance to further advance the mission of DSU. As far as how the money will be spent, Dr. Allen says the focus will be on three major areas including growing their endowment, further developing Wesley College as well as funding the global institute for equity, inclusion and civil rights.

“Today is a good day for Delaware state university. I want you all to be proud and recognize that these kinds of opportunities that we are getting at the university are a reflection of you. Like I have said many times the power of you is the most transformational power we can have and we are proud to be working with you,” says Dr. Allen.

While humbled to have received the donation, Dr. Allen says it came at no surprise because he knows this is Delaware State University’s time to build and grow. In total, DSU has raised more than 32-million dollars this year from a variety of notable corporations, foundations and alumni.

Anderson will use the funds to make strategic investments to benefit students short- and long-term. Among UMES’ top priorities is financial assistance for students, many of whom are challenged in finding ways to pay for their college education.

This past summer, Scott announced the release of $1.7 billion to support 116 organizations engaged in nine areas of interest to her, including Spelman and Morehouse colleges and Hampton, Howard, Tuskegee and Xavier (La.) universities, all private, historically black institutions.

Scott called the pandemic, “a wrecking ball in the lives of Americans already struggling. Economic losses and health outcomes alike have been worse for women, for people of color, and for people living in poverty. Meanwhile, it has substantially increased the wealth of billionaires.”