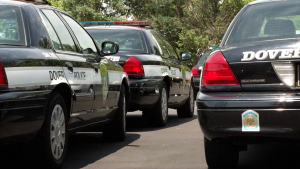 DOVER Del. – Police say a 29 year old man from Dover who is apparently wanted on weapon and other related charges, is missing.

On Friday just before 5:30 pm, Delaware State Police responded to Union Church Road, for an incident involving a gun.

Officials say, Andrew Parsons who is the person they are looking for, reportedly got into a verbal argument with a 46 year old man.
Parsons allegedly fired a single round into the ground several feet from the other man, and he then apparently fled the scene.

Parsons is believed to be staying at another residence, or sleeping in his blue Chevrolet pickup truck.

Police ask if anyone comes in contact with Parsons to use extreme caution, he is believed to be armed and dangerous. Anyone with information about where he may be is asked to call the Delaware State Police Criminal Investigative Unit at 302-365-8525.