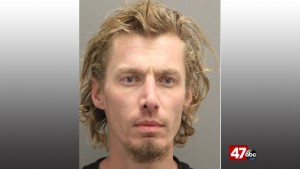 GREENWOOD, Del. — Delaware State Police arrested a Seaford man, after police say he lead troopers on a chase in a stolen car.

Police say  on Wednesday, around 3 p.m., they responded a call from a man who was checking on family member’s home on Nine Foot Rood in Greenwood.

When police arrived at the home, they noticed signs of a forced entry and a light blue 2012 Nissan Versa missing from the residence.

Police were contacted and able to locate the stolen vehicle.  A traffic stop was initiated but the suspect failed to stop.

After leading police on a chase, the suspect crashed the vehicle in the area of Deep Grass Lane and Thistlewood Road, Houston.

The suspect was later identified as  37-year-old, Jesse A. Nichols of Seaford.  Following a search, police discovered several pieces of stolen jewelry and property.

Nichols was transported to Troop 3, where he was charged with multiple crimes including: burglary 2nd degree, theft of a motor vehicle and disregarding a police officer signal.

Nichols was arraigned and committed to Sussex Correctional Institution on a $15,610.00 cash bond.