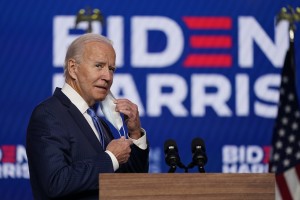 WASHINGTON (AP)- The Associated Press announced that Joe Biden will be the 46th president of the United States.
They projected this after a victory in Pennsylvania that put Biden over 270 Electoral College votes.
AP said his win came after more than three days of uncertainty as election officials sorted through mail-in votes that slowed down the processing of some ballots.
In a statement on Twitter Biden said, “America, I’m honored that you have chosen me to lead our great country. The work ahead of us will be hard, but I promise you this: I will be a President for all Americans- whether you voted for me or not. I will keep the faith that you have placed in me.”

Kamala Harris will be the vice president, making her the first Black woman and first person of South Asian descent elected as vice president of the U.S.
Categories: Delaware, Local News, Maryland, Virginia

'An embarrassment to our state': Chair of Dem. party speaks after Harris accused of trying to bring gun to House