Delmarva’s Weather of Thanksgiving Past

Delmarva has had some interesting Thanksgiving Day weather in the past. From rain, to snow, to record warmth, and frigid cold. Here is a look at some of the extreme weather Delmarva has experienced on Thanksgiving. 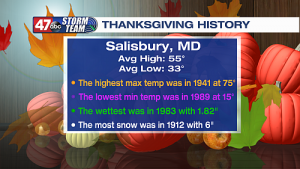 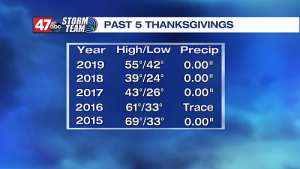 As you can see from the graphic at the very top, this year will be another mild one with highs in the 60s, which will make it the fourth above average Thanksgiving in the past six years. When you look back at precipitation, we haven’t had much on Thanksgiving, at least not in the last several years. We had a trace back in 2016. Thanksgiving 2020 will be the first Thanksgiving in six years where we receive measurable precipitation. 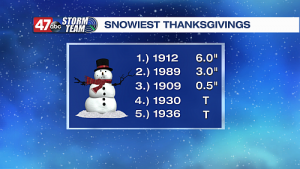 A Wild Week of Weather on Delmarva