DE Lt. Governor back alongside Carney for four more years 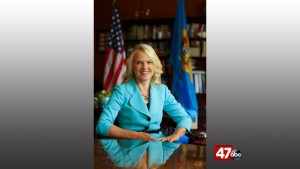 DOVER, Del. – In the race for the Lieutenant Governor, Democrat Bethany Hall-Long will be back to serve alongside Governor John Carney.  The AP called the race in favor of Hall-Long over republican challenger Donyale Hall. Early results showed Hall-Long with 59% of the vote and Hall with 41%. Lieutenant Governor Hall-Long says she’s grateful that the residents of Delaware have voted for her to serve the first state for another four years.

“Right now we’ve got to have a health community first and then we’re going to get that healthy economy. Ultimately it’s about our jobs, good-paying wages, making sure our children and families are treated with equity, and that no matter your zip code, you have the access to a solid education, and you have the things that you need,” said Hall-Long.

Lieutenant Governor Hall-Long adds that she also wants to continue to focus on education in the state. She says every child in Delaware deserves a first-class education that prepares them for the world and the economy of the future and that the state must invest in its teachers and students.

Portion of Glen Ave. to close Saturday for SU commencement