BREAKING: GSA has determined Joe Biden as apparent winner of the 2020 presidential election 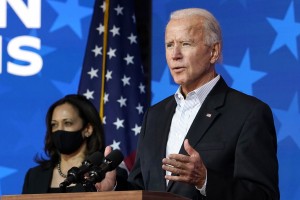 WASHINGTON —  The Associated Press is reporting that The General Services Administration has determined that President-elect Joe Biden is the “apparent winner” of the November 3 elections, clearing the way for the official start of the transition from the administration of President Donald Trump.

In doing so, Biden’s advisers can begin coordinating with federal agencies around plans for the new government to take over on January 20.