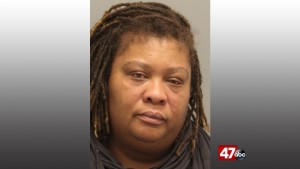 Police say on Friday, October 2nd, just after 2:20 a.m. 2:22 a.m., troopers responded to the 800 block of Willow Grove Road, for a report of a burglary in progress.  Further investigation revealed that Daniels had previously resided at the residence and responded to retrieve her property.

Authorities say Daniels was not granted access into the residence and became irate. Police tell 47ABC that she then pushed in a window air conditioning unit and entered the residence.

Police say once inside, Daniels proceeded to kick in a bedroom door, to where a 53-year-old female was located and a physical altercation ensued. According to police, Daniels then removed her property from the residence before fleeing. The 53-year-old victim was transported to a local hospital, where she was treated for her injuries.

Troopers arrested Daniels on Monday, October 5th. She was taken into custody and transported to Troop 3, where she was charged with the following crimes:

Daniels was arraigned in Justice of the Peace Court #2 and committed on a $6,500.00 cash bond.