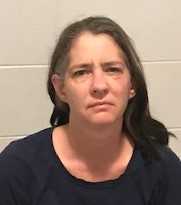 Police said just before 10:30 p.m. MSP was dispatched to the 200-block of Water St. in Sharptown for a reported shooting.

They said when they arrived at the home the victim Edward Kohlhoff III, 51-years-old, of Sharptown, was suffering from apparent gunshot wounds.

We are told the suspect, Sharon Kohlhoff, 55- years-old, of Sharptown, who is the wife of the victim, was also in the home.

Police said they saw a handgun in plain view on a cabinet.

Police said the preliminary investigation indicates that the suspect got a handgun from the second floor area of the house shortly before 10:30 p.m.

Officers said she came downstairs and during a reported argument with her husband she allegedly shot him multiple times.

Police said the suspect contacted police earlier Friday night to inquire about how to get a protective order. The procedure was explained to the suspect, but she did not report any type of assault or request any further assistance.

We are told Kohlhoff was charged with first degree murder, first degree assault, and use of a handgun in the commission of a felony.  She has been taken to the Wicomico County central booking center to await an initial appearance before a court commissioner.

Police said the victim was pronounced dead at the scene.