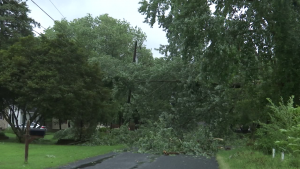 SALISBURY, Md. – A confirmed tornado touched down Tuesday morning in the area of Pine Way in Salisbury.

Around 8:30 AM, there were trees across the road in the neighborhood which is behind Carmax off of Route 13. The strong winds and heavy rain ripped through the area before making it’s way up towards Delmar, where residents reported more trees and branches down.

Jordan Capra lives on the road with his family and says he was shocked to see and hear the damage happening right outside his house, “I woke up and kind of just saw the tree hanging on the power line. I saw the branches were down but I didn’t really hear it. But I saw it there and I was kind of thrown off by it. I didn’t think it was going to be that bad until I heard the wind and all that. I heard the wind first and then I saw the power line but I didn’t really hear it. I saw it hanging there it was kind of crazy. I didn’t think that was going to happen.”