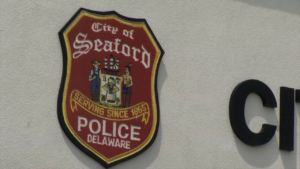 Police said they responded to shots fired in the 700 Block of Collins Ave around 8 p.m.

Officers said when they arrived they saw that two people had been shot.

They were transported to the local hospital with non-life threatening injuries.

Police said prior to the shooting there was a large gathering of people at the scene.

Seaford Police are now asking anyone who has video or pictures of the gathering prior to the shooting or anyone with more information about the incident to contact them at (302) 629-6645.