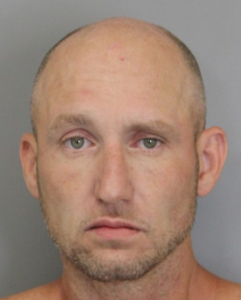 Police said around 1:30 a.m. Troopers responded to Orange Blossom Ln. for a burglary.

Police said when they arrived a 42-year-old woman, from Seaford, said when she got home a person was inside her house, who was later identified as Wilkinson.

Officers said during the investigation they found out that the suspect came through the window.

Police said when they were searching outside the home a K-9 track led to the back of the house where Troopers found Wilkinson laying on the ground near bushes.

Wilkinson was taken into custody.

Wilkinson is being charged with burglary 2nd degree, theft, and criminal mischief.

Wilkinson was arraigned in the Justice of the Peace Court #3 and committed to the Sussex Correctional Institution on $4,000.00 secured bond.