** Dangerous heat expected late this weekend and early next week. **
** Excessive Heat Watch has been issued for northern Delmarva Sunday through Tuesday. **

Tonight will be partly to mostly cloudy with a chance for isolated showers. Temperatures will be warm in the low and mid 70s.

Saturday will be another hot day with highs around 90 degrees under partly to mostly sunny skies. Isolated storms are possible. Heat index values will hover near 100°. Sunday looks even hotter with sunny skies and highs in the mid 90s. Heat index values are expected to be between 100°-106°.

Monday will be the hottest day of the week with highs in the mid and upper 90s. Mostly sunny skies can be expected with a chance for storms late. Heat index values could climb between 105°-110°. Tuesday stays very hot with mostly sunny skies and highs in the mid 90s. Isolated storms are possible during the afternoon with heat indices between 105-109°.

Friday could break the heat wave with highs expected to drop into the upper 80s with a chance for isolated storms.

Have a great weekend and stay cool! 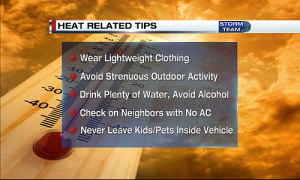