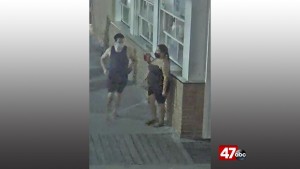 REHOBOTH BEACH, Del. — Rehoboth Beach police are asking for the public’s help in finding a man they believe is responsible for a Thursday night assault that happened on the boardwalk.

Authorities say just before 9:30 p.m., the man in the picture above was involved in a fight on the boardwalk just north of Rehoboth Avenue. The suspect allegedly took a hat from the alleged victim and attempted to run away.
Police then say the victim chased the suspect down and a fight later ensued.

The suspect was accompanied by the woman also in the picture.

Anyone with information that could lead to identifying the suspect or the woman pictured is asked to contact Sergeant Mark Sweet at 302 -227-2577. You can also submit anonymous tips on their website at cityofrehoboth.com.