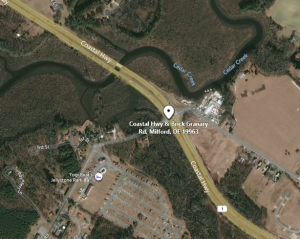 Police said around midnight a 2014 Dodge Durango, with eight people in it, was driving southbound on Coastal Hwy just north of Brick Granary Rd.

We are told the Durango exited the right side of the roadway and struck a guard rail and bridge barrier.

Police said because of the impact the car diverted back across the roadway where it exited the southbound lanes and entered the grass median.

The car then overturned many times.

Police said all of the occupants were removed from the car before it caught on fire.

Police said the driver, a 31-year-old man, from Philadelphia, was not properly restrained.

We are told the driver was transported to the hospital with serious injuries.

Police said the driver’s girlfriend, a 28-year-old, from Philadelphia, was properly restrained.

She was transported to the hospital and treated for minor injuries.

Police said six children were also in the car, all were properly restrained, but they were not seated in child safety seats.

We are told three of the children, two 3-year-olds and a 6-year-old were transported to the hospital with critical injuries.

Police said the other three children a 10-year-old and two 2-year-olds were also transported to the hospital and treated with non-life threatening injuries.

The crash remains under investigation and anyone with information regarding the incident is asked to call Delaware State Police at (302) 703-3264.

"We feel it's something that the world needs more of right now:" New virtual art exhibit coming soon