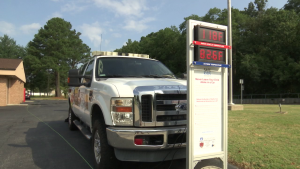 SALISBURY, Md. – The Salisbury Fire Department and several other groups are teaming up to make sure all drivers are aware of the dangers of hot cars.

The fire department put a display outside of their building on Beaglin Drive on Tuesday, showing how hot the inside of a car can get within just minutes.

The team put the vehicle out there at 8 o’clock, and they say by 9 o’clock, the temperature inside the car went up thirty degrees.

EMS Captain Chris Truitt tells 47 ABC the display serves as a reminder that it’s never safe to leave children, pets, or anyone inside of a hot car, even if it’s just for a few minutes.

“They need to know that it’s absolutely not safe, when we first started this, in 20 minutes it raised a good 15-20 degrees, so everybody is miserable when it’s hot, and just think of inside, there’s no air flow, it’s like being in a small oven almost,” Truitt said.

Truitt adds that, if left in a vehicle, children could suffer heat exhaustion, which includes symptoms like nausea, dizziness, or no sweating.