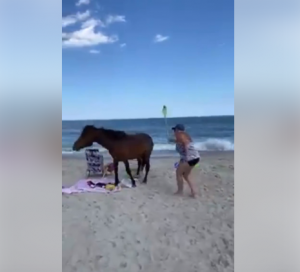 BERLIN, Md. – A video posted on the People of the Ocean City Boardwalk page, showing a woman hitting a horse on Assateague Island with what looks like a broom, garnered hundreds of comments and thousands of shares on Sunday. Now, that video has been reported to police.

Liz Davis, a spokeswoman for Assateague Island, says the video was reported to law enforcement, but that it may be hard to tell exactly where the video was taken.

The video appears to show the horse approaching chairs/food, and a woman coming up behind the horse and hitting it with an object. The horse kicks, and the woman falls backward.

Davis says the video was reported to police on Sunday.