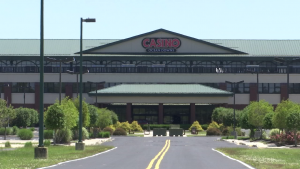 BERLIN, Md. – Federal, state and local elected officials toured Ocean Downs Casino on Monday to see how they are preparing to reopen.

Maryland’s casinos have been closed for more than two months and officials say that’s impacted budgets all across the board. Ocean Downs is navigating ways to properly socially distance machines and provide barriers between people at other games. Congressman Andy Harris tells 47 ABC he supports Governor Larry Hogan’s phased reopening but would like to see casinos included early on in those plans.

“The bottom line is if we don’t open and again Delaware has decided they can open safely. I think we can open safely otherwise we’re going to lose our revenue to Delaware,” says Republican Congressman Andy Harris. “That’s a real shame when all the local jurisdictions as well as the state are complaining revenue projections are going down. Why wouldn’t we want to retain the revenue here in Maryland?”

Ocean Downs Casino was just one of the spots Congressman Andy Harris visited on Monday. He also stopped by a wedding venue in Delmar as well as a few real money casino places in Ocean City including a go-kart track and a restaurant.