Well, that was fast! Tropcial Storm Bertha, the second named storm of the 2020 Atlantic hurricane season formed early this morning, then a couple hours later made landfall in South Carolina.

This system wasn’t originally expected to strengthen enough to become a named storm, but it did anyway. The warm waters off the coast of Florida and the SE states, along with low shear allowed for quick development. The National Hurricane Center (NHC) had this system on their radar (no pun intended) for a couple of days, but only had it pegged at a 20-30% chance of developing. As the system strengthened overnight on May 26th and into Wednesday morning on May 27th, the NHC increased the liklihood of tropical development to 70% before officially naming it Bertha in the early morning hours of Wednesday. Just two hours later, it made landfall in South Carolina, then was quickly downgraded to a Tropical Depression. Bertha will continue to weaken, but it will also spread rain far inland into the Carolinas and southwestern Virginia Wednesday night, and then into West Virginia and western Pennsylvania on Thursday.

The 2020 hurricane season is definitely off to an active and early start. Two storms have already been named, and the official hurricane season doesn’t begin until June 1st. Tropical Storm Bertha makes it just the sixth time a “B”named storm developed before the start of hurricane season. Cristobal is the next name on the list of 2020 storms. Stay tuned. 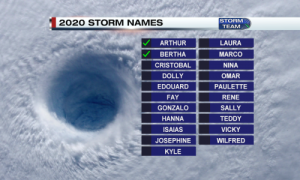