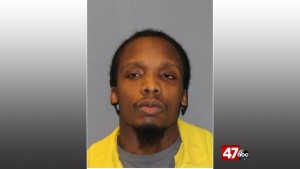 CAMBRIDGE, Md. – Maryland State Police and The Dorchester County Sherrif’s office are looking for a fugitive, wanted in connection to a homicide investigation that happened in Dorchester County.

the wanted fugitive is identified as 29-year-old James Reddick Jr. of Baltimore. Reddick also goes by the name of Shane or Dre.
Police say Reddick is wanted for first-degree murder among other charges, he’s also wanted by the U.S. Marshals Service.

Investigators say Reddick is known to visit York, Pennsylvania, and Baltimore, Maryland. He’s considered to be armed and dangerous.

The victim in the homicide was identified as 25-year-old Deontae Belcher of Rosedale. He was found in a wooded area in Dorchester County on May 1st.
An autopsy ruled the death a homicide by a gunshot wound.

Back on May 1st, the Dorchester County Sheriff’s Office responded to reports of a deceased person lying along a power line trail on Horns Point Road. When Investigators found the decomposing body of the victim.

Belcher was last seen on April 11th getting into a car with two other people, He was reported missing to the Baltimore County Police Department 7 days later.