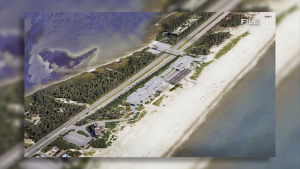 FENWICK ISLAND, Del. – A wind farm set to be built off Delaware’s coast should now be completed one year later than originally planned.

The company, Ørsted, says the turbines will now be built by the end of 2023 instead of 2022. Officials tell 47 ABC that Ørsted is receiving its “federal Notice of Intent” for the Skipjack Wind Farm later than originally anticipated. In a statement they say, “Ørsted remains firmly committed to working with our federal partners to complete Skipjack and provide clean, reliable offshore wind energy to 35,000 homes in the Delmarva region.”

According to Ørsted, “a Notice of Intent is a communication issued by the U.S. Bureau of Ocean Energy Management (BOEM) during the federal permitting process announcing its intent to prepare an Environmental Impact Statement for the Construction and Operations Plan (COP) submitted by Skipjack Offshore Wind, LLC.”

Ørsted says the Skipjack Wind Farm is a 120 megawatt offshore wind project under development 19 miles off the Maryland-Delaware coast. The company estimates the project will create approximately 1,400 full-time equivalent jobs and $200 million in economic investment in the region.

The wind farm has been at the center of many town halls with some residents expressing concern that the turbines may impact wildlife while others support the alternative energy option.

Click here to learn more about the Skipjack Wind Farm.