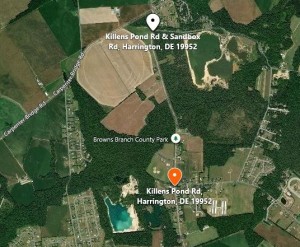 HARRINGTON, Del. – The Delaware State Police are investigating after a man’s body was found in a road early Friday morning, and was later ruled a homicide.
Police say they responded to the area of Killens Pond Road between Sandbox Road and Bloomfield Road on Friday around 1:10 in the morning, where a passerby reported the body in the road. The victim was later identified as 40-year-old John Groff of Lincoln.
After an autopsy was performed, officials learned Groff died of two gunshot wounds to the upper body. Now, police are looking for more information.
Anyone with any information is urged to contact Delaware State Police at 302-741-2821.
Categories: Delaware, Local News
Tags: Bloomfield Road, body, delaware state police, harrington, killens pond road, police, road, Sandbox Road

President Biden keeps US cap on refugee admissions at 125,000 for the 2023 budget year