DELMARVA – A chicken company on Delmarva will be killing nearly two million chickens and not processing them for food because staffing is down amidst the COVID-19 pandemic and the plant can’t keep up. 47 ABC confirmed the report on Friday with Delmarva Poultry Industry Inc., although they would not say which company was behind the move. 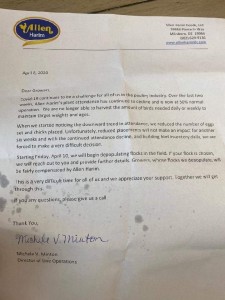 47 ABC did however obtain a letter, claiming to be from Allen Harim, that says the depopulation starts on Friday, April 10th, because the plant’s attendance is at 50 percent. The letter continues to say that Allen Harim has reduced the number of eggs and chicks placed but that won’t make an impact for another six weeks. 47 ABC reached out to Allen Harim for a comment on this but has not heard back.

Meanwhile, DPI says a move like this was a last resort option after other avenues were explored. If they remain on the farms, they are going to get larger and there are going to be some animal welfare in that sense and also if they get to a certain size then even the processing lines are set up for a certain size bird,” says Holly Porter the Executive Director for Delmarva Poultry Inc.

47 ABC also reached out to Perdue, Mountaire and Tyson about this move. Perdue says, “We are not doing that or have plans to do it in the near future”. Tyson says, “We haven’t had to depopulate flocks and we hope it doesn’t come to that, but we won’t speculate about the future.” Mountaire says, “We have no plans at this time to depopulate any chickens, but we understand that other companies are faced with difficult decisions during this crisis.”

DPI says the methods used to “depopulate” the flocks are, “accepted by the American Veterinary Medical Association and all state and local guidelines.”

“Before taking this step, the company exhausted the study of other alternatives, including allowing another chicken company to transport and process the chickens and taking a partially processed product to rendering facilities to utilize for other animal feed.” Porter says other companies weren’t able to take the birds because there has been a reduced workforce across all plants. She says the chickens weren’t able to be used to animal feed because they have to be at a certain growth stage for that process.

Again DPI would not confirm if Allen Harim is the company depopulating the flocks but says the affected chicken growers will be compensated for their contracted work.

“We need to talk about the industrialized food system in terms of their inability to pivot during a crisis. There are cracks in this system. We need diversity in our food system. Diversified farms are able to adjust in times of crisis,” says Maria Payan, a Selbyville consultant for the group Socially Responsible Agricultural Project. “This vertical system does not have the ability to respond efficiently. We are seeing problems from the growers, workers being protected and impacts to public health and the environment.”

Fearful US residents in Afghanistan hiding out from Taliban