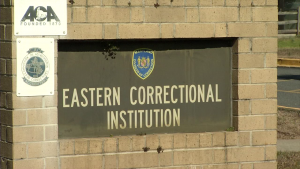 According to the spokesperson for the Maryland Department of Public Safety and Correctional Services, a non-uniformed employee at the facility in Westover has tested positive for coronavirus. 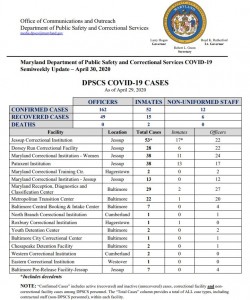 As of Thursday, Maryland officials say 226 cases have been confirmed in the correctional system statewide. That total includes 162 officers, 52 inmates and 12 non-uniformed staff. Officials also report that two inmates have died from COVID-19 at Jessup Correctional Institution.

On April 16, U.S. Senators Chris Van Hollen and Ben Cardin and Congressmen Jamie B. Raskin, Steny H. Hoyer, C.A. Dutch Ruppersberger, John P. Sarbanes, Anthony G. Brown, and David Trone (all D-Md.) sent a letter to Maryland Governor Larry Hogan, urging him to take steps to address the outbreak of COVID-19 within the State’s prisons. They say that an outbreak within Maryland’s prison system threatens not only those incarcerated but also corrections employees and the surrounding communities.

On April 18, Governor Larry Hogan signed an executive order to expedite the release of hundreds of inmates scheduled to be let out in the next four months. It also orders the Department of Corrections to accelerate consideration of parole for inmates over the age 60 with records of good behavior.

Salisbury Marathon a go this April, runners can expect changes

The Latest: At 100, Captain Tom Moore honored at funeral